The school presently consists of 3 institutes and 1 research center: Key Disciplineof Shandong "Twelfth Five Year Plan" Biochemistry and Molecular Biology, Shandong Province Key Laboratory of Applied Mycology, Key Laboratory of Plant Biotechnology of Shandong Colleges and Universities, and Shandong Demonstration Center for Biological Experiment and Teaching. Moreover, there are an excellent teaching team for the course of Plant physiology and over seven provincial excellent course for Botany, Plant physiology, Microbiology and Genetics. Especially, Botany and Genetics are provincial pilot course, and Plant Physiology was granted by the special funds for construction of basic discipline in the colleges and universities of Shandong province.

The research of the school is mainly focused on three areas, molecular mechanism of plant stress responses, discovery and regulation of functional genes in crops such as peanuts, soybeans and tomatoes, and germplasm innovation and novel active metabolite synthesis in edible and medicinal fungi. In the past “Twelfth Five Year Plan”，the school has made great achievements. Over 120 research programs (67 programs granted by national foundation) were granted by at least 36 million Yuan funding in 2015, over 600 academic papers were published in different journals includingNature, Plant Cell,PNASandPlant Journaletc., over 10 national patents were authorized, and 6 provincial and ministerial science and technology awards were obtained. The Project of “Research on Grifola Frondosapolysaccharida and its medical research” led by Professor Ai-Rong Song was successfully transferred for 9,000,000 yuan to a high-tech biotechnology company. The projects of “Development of new peanut germplasm materials and new cultivars with high yield and high oleic acid” and “Application of newbreeding techniquesin peanut” led by Professor Jing-Shan Wang won the second prize of National Award for Technological Invention 2013 and the second prize of Provincial Award for Technological Invention 2012. The project of “Regulatory mechanism of stomatal movement in plant stress response” led by Professor Xin Liu gained the third prize of Provincial Award for Natural Science 2014.

The core philosophy of education in the school is to cultivate the broad knowledge and skill, team working, hard working and innovative spirit of interdisciplinary talent. Since its founding, the school facilities and management for teaching and research have been greatly improved. The school attaches great importance to the cultivation of students’ innovation consciousness and innovation ability, and actively encourages students to participate in theresearch projects. In past years, a number of students won the first, second and third award for “challenge cup” of Business Plan Contest for Students in Shandong Province. One student gained the silver medal for the National College Entrepreneurship Competition.

The School of Life Science has established the closely collaborative relationship with oversea universities such as Purdue University, University of Washington, University of Kansas and National University of Seoul. There are two international research centers, the Qingdao International Center on Microbes Utilizing Biogas and the Shandong China-America Oil Crops Research Center. The school has also developed a long-term collaborative research with domestic universities and institutes such as Chinese Academy of Sciences, Chinese Academy of Agricultural Sciences and China Agricultural University. Each year many well-known experts and scholars from the country and abroad visit the school for academic exchange and cooperative research. 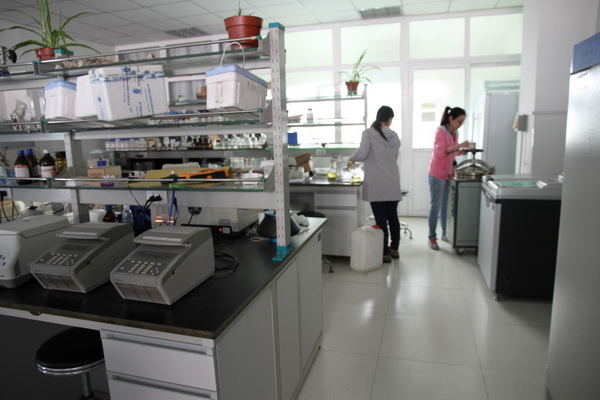 Key Laboratory of Plant Biotechnology of Shandong Colleges and Universities 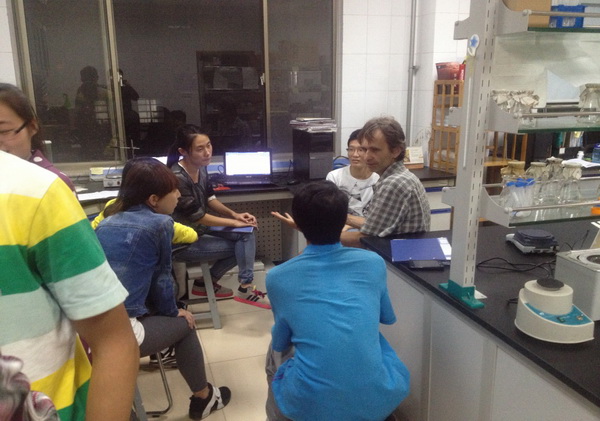 Dr. Martin Sadilek at the University of Washington visited the School of Life Science in 2014. Dr. Sadilek was discussing the experimental designs of proteomics and metabolomics with the students in Qingdao International Center on Microbes Utilizing Biogas. 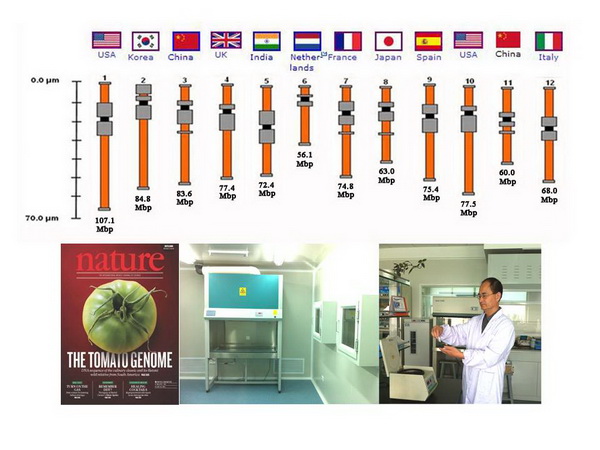 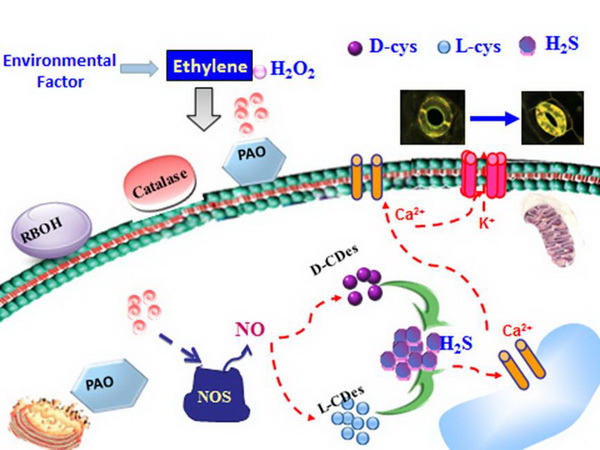 The study of regulatory mechanism of stomatal movement in plant stress response is carried out in Professor Xin Liu’s group. This project won the third prize of Provincial Award for Natural Science 2014. Figure Legend: Under the osmotic stress conditions, the formation of ethylene plays as the first messenger in plant, then across the cell membrane to be the second messenger for transferring signals. H2O2 produced by polyamine oxidase (PAO) is transferred to NO molecule which is generated by the nitric oxide synthase (NOS) pathway. Then H2S produced by L-/D- cysteine desulfhydrase (CDes) was activated and passed to the calcium signal finally. This signaling cascade can regulate the activity of potassium ion channel, thereby inducing stomatal closure. 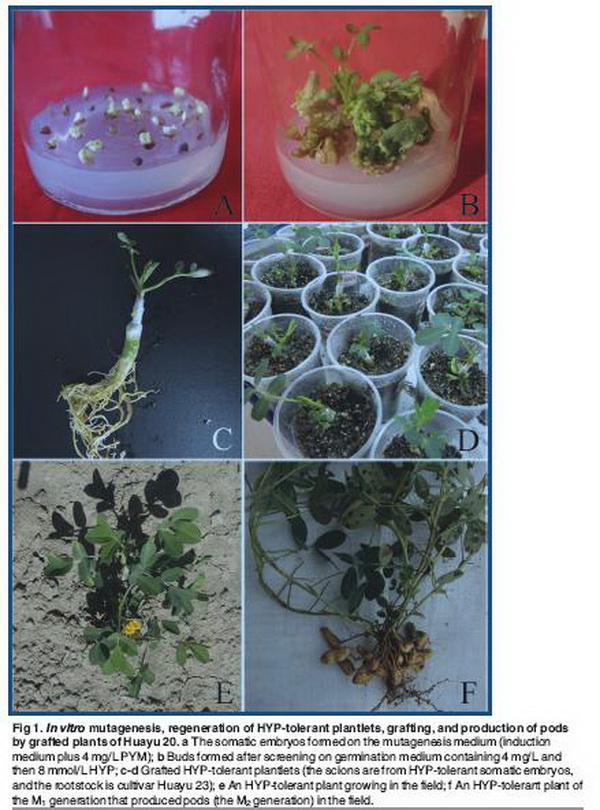 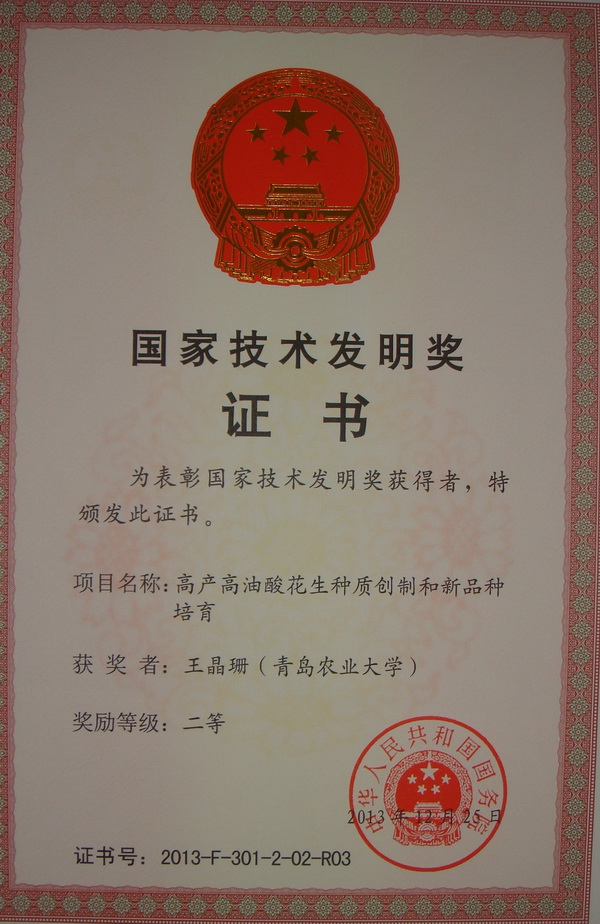 The project of development of new peanut germplasm materials and new cultivars with high yield and high oleic acid led by Professor Jing-shan Wang and her team won State Technological Invention Award, Second Prize. The State Council of the People's Republic of China, 201312, Grant No: 2013-F-301-2-02-R03. 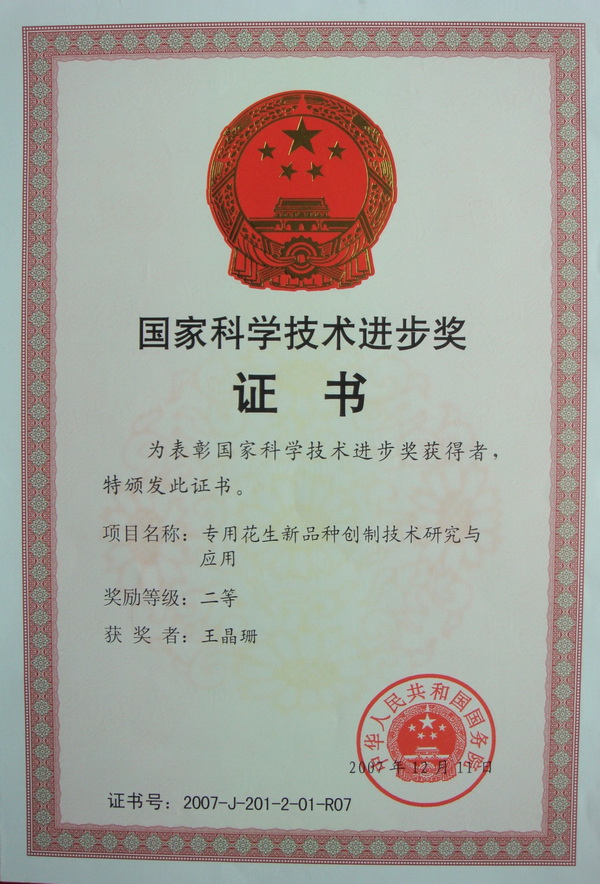 The project of research and application of innovation technology on newly special peanut varieties led by Professor Jing-shan Wang and her team won the National Prize for Progress in Science and Technology, second prize. The State Council of the People's Republic of China, 200712, Grant No: 2007-J-201-2-01-R07. 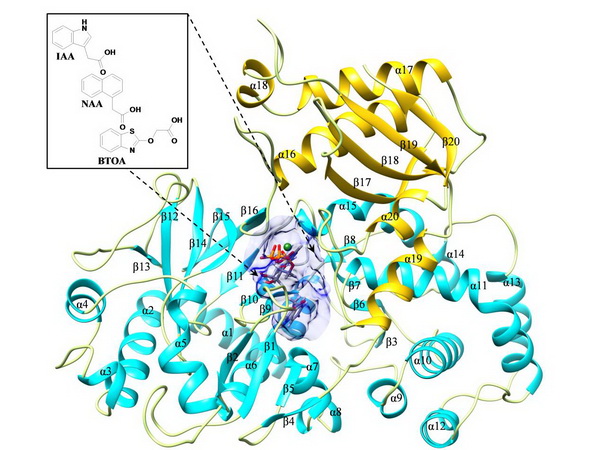 The Structural and Dynamic Basis of Acid Amido Synthetase GH3.1: An Investigation of Substrate Selectivity and Major Active Site Access Channels(Molecular Biosystems,11, 809-818.2015). Figure Legend: Auxin/IAA (Indole-3-acetic acid) plays critical rolesin many aspects of plant growth and development. Gretchen Hagen 3.1 (GH3.1) enzyme from grapevine (Vitis vinifera) catalyzes the ATP-dependent conjugation of aspartate to IAAsuggested a significant way to modulate levels of cellular auxins/IAA. It is reported that VvGH3.1 prefers IAA as substrate than 1-naphthaleneacetic acid (NAA) and benzothiazole-2-oxyacetic acid (BTOA), whereas the detailed interaction mechanism of these substrates remains unclear. In this study, based on the recently reported crystal structure of VvGH3.1 and AtGH3.12, the open form of VvGH3.1 was built. Then combined computational techniques were utilized to investigate bindingmechanism of three substrates, IAA, NAAand BTOA, and dynamicbehaviors of GH3.1induced bysubstratebinding. 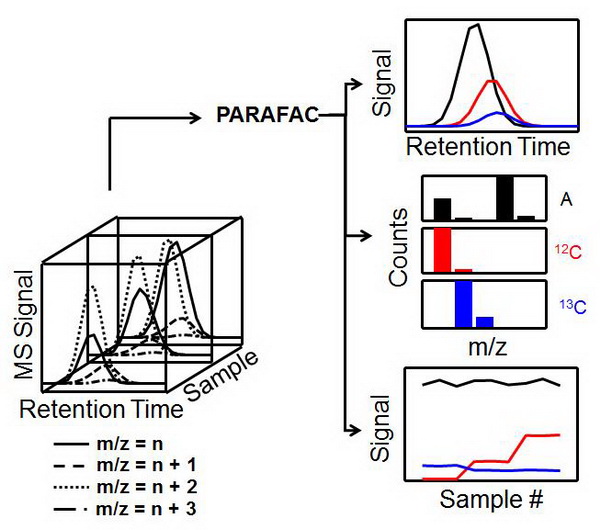 Comprehensive discovery of 13C labeled metabolomics in the bacterium Methylobacterium extorquens AM1 using gas chromatography mass spectrometry (Journal of Chromatogaphy A, 2013, 1317:175-85). This collaborative project has been carried out by Qingdao International Center on Microbes Utilizing Biogas in the School of Life Science and Department of Microbiology at the University of Washington. Figure Legend:Data analysis procedure: replicate chromatographic runs as a function of the experimental design are stacked in parallel to create a cube of data with a separation time dimension, mass spectral dimension, and sample number dimension. PARAFAC is applied, utilizing the sufficiently trilinear data structure to accurately deconvolute separate individual analyte contributions.

Discovery of a new sesquiterpenoid from Phellinus ignariuswith antiviral activity against influenza virus (Archives of Virology2014, 159(4):753-60.) Figure Legend:The binding interface of a new sesquiterpenoid with NA. A. Molecular mode of NA was showed in ribbon and the view was down the 4-fold axis form above. B. Calcium ions ligands sites and binding interfaces of compound 1 with NA. C. A zoom of molecular surface of NA showed the detail of compound 1 binding with NA.